Motivation: This Force Has 3 Times The Power of Rewards 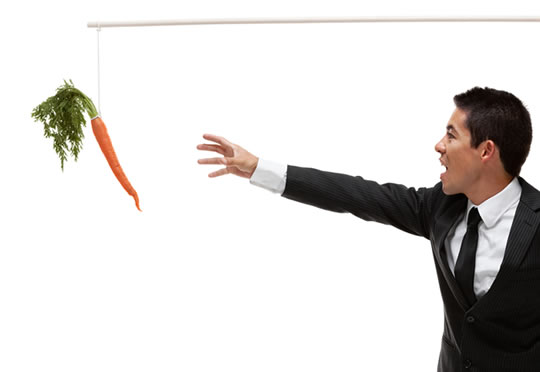 What can change behaviour two or three times more powerfully than rewards?

To change people’s behaviour, the stick beats the carrot, but it only needs to be a small stick, research finds.

A new study compared the effects of punishments (stick) with rewards (carrot) to see which worked best.

The psychologists found the influence of punishments outweighed rewards by two or three times.

Our study showed that such feedback does not have to be harsh, since it appears that we tend to react in the same manner to any amount of negative feedback.

From an evolutionary perspective, people tend to avoid punishments or dangerous situations.

Rewards, on the other hand, have less of a life-threatening impact.”

The study itself had people doing a task for which they were periodically either rewarded or punished.

The punishments and rewards were tiny: only tokens marked in cents between 5 and 25.

The researchers looked at how these rewards and punishments affected behaviour.

They found that rewarding behaviour naturally encouraged it.

However, the size of the encouragement was relatively small when compared to the discouraging effect of punishment.

“Objectively, you’d think that winning 25 cents would have the same magnitude of effect as losing 25 cents, but that’s not what we find.”

Professor Richard A. Abrams, another of the study’s authors, said:

“The question of how rewards and punishments influence behavior has occupied psychologists for over 100 years.

The difficulty has been devising effective tasks to probe that question.

We used a simple approach that reveals dramatic differences in the way people respond to different types of feedback.”

Bear in mind, though, that continuous negative feedback has all sorts of other effects which aren’t measured by this study.

To give just one example: people will hate you.

Still, the study is a handy reminder that negative feedback can sometimes be powerful, when used appropriately.

The research was published in the journal Cognition (Kubanek et al., 2015).