Months Before They Start to Talk, Babies are Mentally Rehearsing Speech 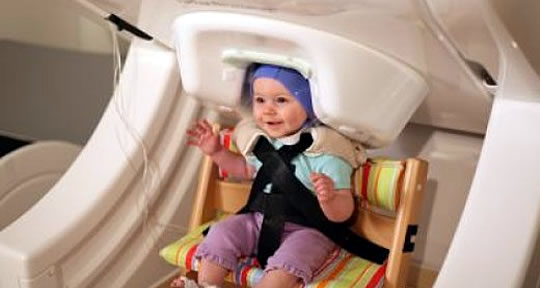 Baby’s brains find it easier to process their native language.

Even before babies begin to speak, the areas of their brains which plan movements — like that of the mouth — are already activated by speech.

Brain scans show they are cognitively laying the groundwork for their native language.

The findings come from a University of Washington study which scanned the brains of 7- and 11-month-old infants while they listened to snatches of English and Spanish.

The study’s lead author, Patricia Kuhl, explained the significance of the findings:

Finding activation in motor areas of the brain when infants are simply listening is significant, because it means the baby’s brain is engaged in trying to talk back right from the start and suggests that 7-month-olds’ brains are already trying to figure out how to make the right movements that will produce words.”

It’s likely that this process of mentally trying to say words contributes to how babies zero in on what will become their native language.

By contrast, before around the age of 8-months, babies respond to all languages in a similar way.

Then, a transition starts to occur as their brains notice that there are particular sounds that are used more often.

In the study, one group of babies was approaching the 8-month cut-off.

For these infants both English and Spanish were equally interesting to the baby’s brains, with the auditory and motor areas springing into action to try and listen to and prepare to reproduce both languages.

In the older group who had reached around 1-year-old, though, the pattern was different.

By this age they have got used to their native language (either English or Spanish in this study), so the brain doesn’t have to work so hard when listening.

In contrast, when the baby hears what has become a non-native language, its brain has to work harder to reproduce it.

Image credit: Institute for Learning & Brain Sciences at the University of Washington