Why Do We Yawn? 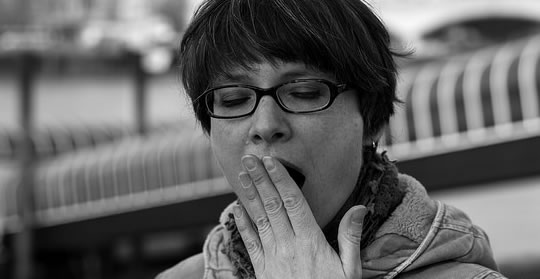 It’s not to do with inhaling more oxygen or expelling more carbon dioxide.

Yawing has long remained a mystery to scientists.

It is well-known that yawns are contagious, in that one person can set other people off: but this doesn’t explain the underlying reason for yawning.

Now research provides evidence to support a new theory: we yawn to cool down our brains.

Our brains work best within a narrow temperature range and yawning increases blood flow to the brain which acts like a radiator to move heat away from it.

The evidence comes from a study by American researchers along with colleagues from the University of Vienna (Massen et al., 2014).

To try and solve the mystery, they began observing people’s spontaneous yawns in both hot and cold climates.

They decided on Vienna in Austria and Tucson, Arizona in the US.

Using these two cities means you can see when people yawn in a wide range of temperatures, from around the freezing point in the winter in Vienna, up to 37°C (98°F) in Tucson in the summer.

The theory goes that people should yawn more when the ambient temperature is around 20°C (68°F).

This is because when it’s cold, we don’t need to cool our brains down. When it’s very hot, yawning is likely to be ineffective in cooling our brains because it’s so hot outside.

And, sure enough, that’s what they observed:

This pattern could also be seen across the seasons in the two cities:

Yawning, then, is highly beneficial in that it can help bring the brain back into the correct temperature range.

When the brain is at the right temperature, it operates more efficiently, helping us to think faster.

This may also help explain why yawning is contagious: way back in our evolutionary history, a more alert group would have been better able to think its way out of dangerous situations.