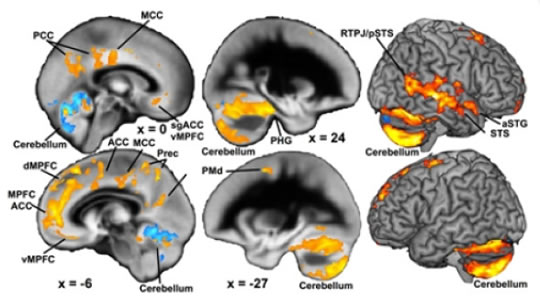 Childhood adversity experienced between ages 0-11 associated with a smaller cerebellum.

New research finds that those who experience relatively common family problems early in childhood have an increased risk of mental health issues later on.

The study is one of the first to look at relatively common family problems–typically mild to moderate in severity–and tie these up to changes in the brain’s development (Walsh et al., 2014).

Brain imaging data from the teenagers at between 17 and 19 found that those who had experienced problems in the early years, like significant tension between their parents or lack of affection, had a smaller cerebellum.

The cerebellum is an area of the brain associated with learning new skills and regulating stress, amongst other things.

This could be a marker of psychological problems later in life as a small cerebellum has been consistently linked to serious mental disorders.

“We show that exposure in childhood and early adolescence to even mild to moderate family difficulties, not just severe forms of abuse, neglect and maltreatment, may affect the developing adolescent brain. We also argue that a smaller cerebellum may be an indicator of mental health issues later on. Reducing exposure to adverse social environments during early life may enhance typical brain development and reduce subsequent mental health risks in adult life.”

One fascinating–and unexpected–finding was that children who experienced significant problems when they were around 14-years-old actually showed increased brain volumes at 17-19.

This finding suggests that mild stress early in adolescence could help build up resilience.

It may be that it is partly the timing of early stressors which determines the eventual outcome–we know from other studies that the brain has a sensitive period in the early years of life.

During the early years the brain is particularly vulnerable to stress and other disadvantageous circumstances.