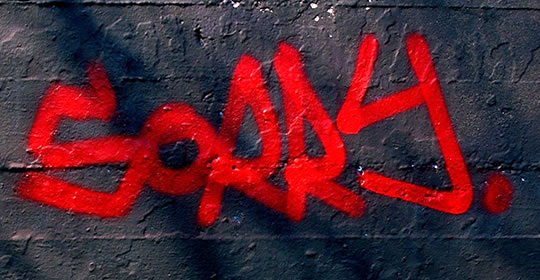 We assume saying sorry will help to mend fences, but do we over-estimate the power of apology?

Barely a week goes by without one or other public figure apologizing for a disaster of monumental proportions. There’s an endless parade of politicians, business leaders, celebrities and others appearing on TV and in print, to own up and say sorry for what they’ve done wrong.

The penitent hope their red-faced admissions of guilt will bring absolution, but can saying sorry really be enough to restore their credibility?

In private life we also have very high expectations of the power of saying sorry. Most of us were brought up in a culture of apology: children must say sorry when they do something wrong and grown-ups must apologize if they bump into each other in the street.

Just how high these expectations are is demonstrated by Dutch psychologist David De Cremer and colleagues in a new study published in Psychological Science (De Cremer et al., 2010). They had a hunch that receiving an apology isn’t as powerfully healing as we’d like to imagine.

In their study participants played a trust game. Each was given €10 and paired up with a partner, who was actually in on the experiment. Participants were told if they gave all the cash to their partner, it would be tripled, then their partner would decide how much of the €30 to share with them.

Participants then rated either the imagined apology or actual apology on a scale of 1 to 7 on the basis of how “reconciling” and “valuable” it was. Participants who merely imagined the apology thought it would be an average of 5.3. But those who actually received the apology only gave it a 3.5.

This confirmed the experimenters’ suspicions that people consistently over-estimated the value of an apology. When their cheating partner actually said sorry, it was never as good as they would have imagined.

Sorry is just the start

This finding mirrors our experience of public apologies. We believe a wrong must be righted and have high expectations of an apology, but they have a tendency to disappoint.

It’s certainly not true to say that apologies are useless. Apologies acknowledge the existence of social rules and the breaking of those rules. If sincere, apologies can help restore the dignity of the victim and the standing of the transgressor.

People are much better off to apologize and take responsibility for their actions than try and make excuses or deny they’ve made a mistake. Psychological research backs up the everyday intuition that excuses and denials just irritate others.

While apologies serve a useful function as a first step, we easily over-estimate the work they can do in repairing a relationship. That is why it is so irritating when public figures apologize, and then act like the matter is finished.

It’s worse when we can clearly see that someone has been forced into apologizing and that the apology itself is insincere. We often detect this kind of attempted deception and discount the apology.

In a strange twist, though, people are less able to detect insincerity when apologies are directed at them.

According to a series of studies conducted by Risen and Gilovich (2007), observers are harsher on an insincere apology than the person at whom it is directed. Perhaps this helps explain why people almost always accept an apology aimed directly at them, whether it’s offered sincerely or not. We want to believe it’s sincere, however much we might feel afterwards that it hasn’t really worked.

It’s similar to when someone is flattering us. Those watching can tell it’s flattery, but we tend to think it’s genuine because it makes us feel good about ourselves.

In contrast, Risen and Gilovich found that observers tend to spot an insincere apology more easily and are likely to reject it. This mirrors the situation when we are watching a public figure apologizing. The slightest whiff of insincerity and we quickly discount the whole thing.

Not only do insincere apologies fail to make amends, they can also cause damage by making us feel angry and distrustful towards those who are trying to trick us into forgiving them.

Even sincere apologies are just the start of the repair process. Although we expect the words “I’m sorry” to do the trick, they don’t do nearly as much as we expect.